Evidence-based Leadership Styles for managers who really want to motivate

Edward L. Deci and Richard M. Ryan state in their 'self-determination theory' that managers usually (mostly unconsciously) think about motivation as a amount. What matters, however, is not whether someone has much or little motivation, but what type of motivation someone experiences. There is a distinction between 'controlled motivation' and 'autonomous motivation'. Extrinsic motivators in the form of 'the carrot or the stick' (a bonus or a form of coercion) lead to 'controlled motivation': doing something because you feel pressure to do it. Experimental research (Deci et al.) has shown that these forms of extrinsic motivators are counterproductive. They suppress the feeling that you do things because you choose to and cause you to experience less pleasure in the activity itself. Reduced intrinsic motivation leads to a reduction in both work performance (especially long-term quality) and job satisfaction. Controlled people are less creative and more often display undesirable behaviour, such as short-term thinking or less integrity.

Deci and Ryan (and many other researchers after them) have shown that autonomous motivation follows when people can make their own choices and influence processes or decisions that affect them (Autonomy), feeling accepted and appreciated by the group one is in (verBand they see in front of them which behaviors are instrumental in achieving goals (Competent). This is also called the ABC of motivation. At the end of the day, both people and organizations reach their maximum potential sooner when these basic psychological needs are met.

The personal style of the manager, although certainly not the only factor, has a significant influence on the degree to which basic psychological needs are met. There are many theories and models of leadership styles, such as situational leadership and servant leadership. Some with more scientific support than others. However, research into self-determination theory and leadership has clearly revealed which styles undermine autonomous motivation and which support it. The latter styles are also referred to as LAS: Leader Autonomy Support. LAS is characterized by leaders who show interest in their employees' perspectives, offer choices and solicit input, encourage self-initiation, and avoid the use of external rewards or sanctions to motivate behavior.

We have developed the evidence-based autonomy-supportive styles into concrete and observable behavioural competencies for managers. Suitable for coaching, training and assessment. 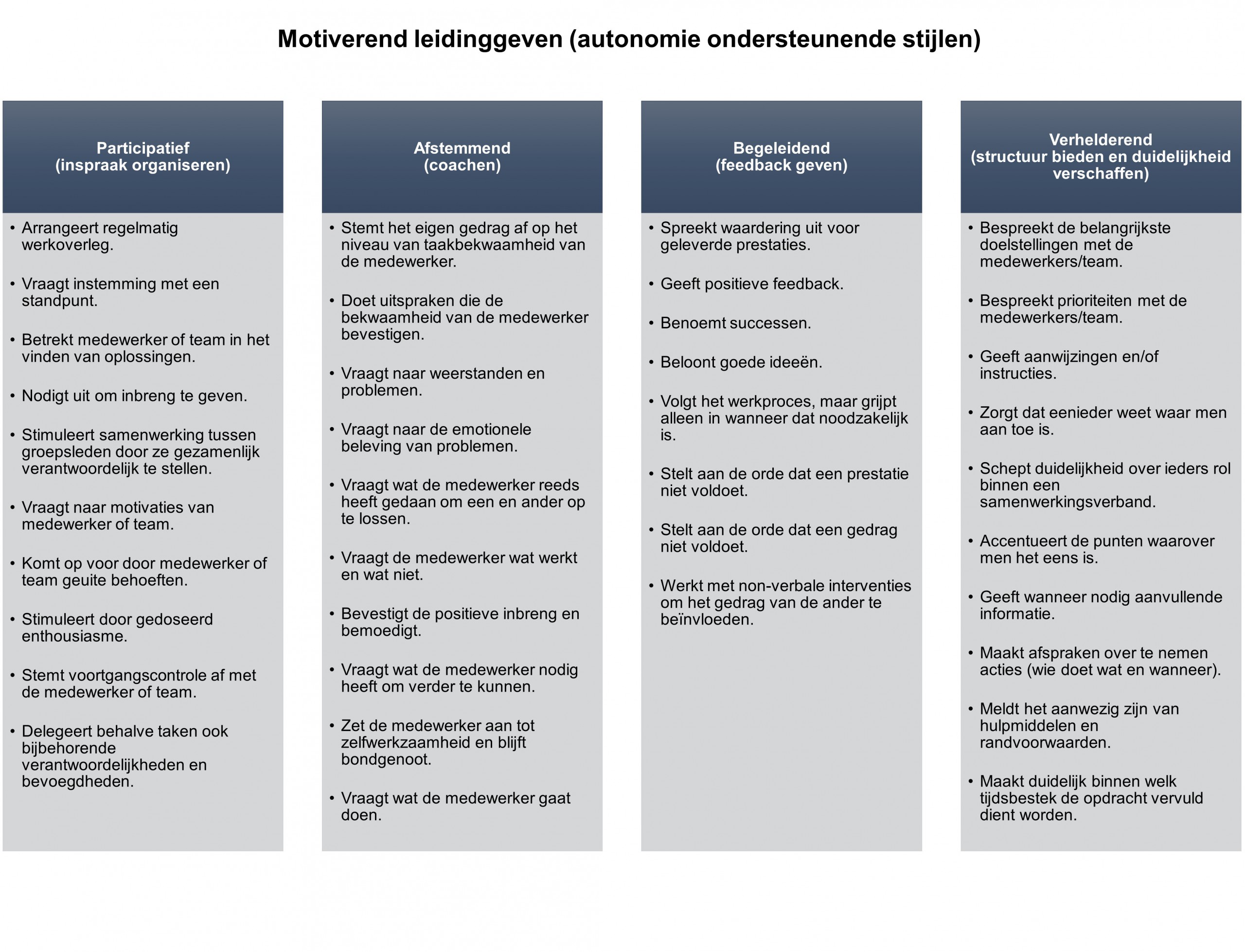 Who we work for